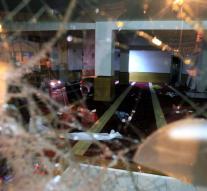 - A group of demonstrators in the town of Ajaccio on the French island of Corsica destroyed a mosque. According to French media, they broke through a glass door and they thrashed the interior. They also attempted to stabbing Korans on fire.

The protesters were among a group of about six hundred protesters. They were gone Friday the street after an incident earlier in the day in which a policeman and two firefighters were injured when they came into action in an area with predominantly social housing.

During the demonstration, the flame hit the pan and attacked a small group inside the mosque. French Prime Minister Manuel Valls and the French Interior Minister Bernard Cazeneuve condemned the attack on the house of prayer.