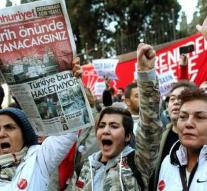 - The arrest of another number of Kurdish politicians in Turkey on Saturday to various protests resulted in not only the country but also in other places. Including in Istanbul and Athens riot police had to bear in sight.

In Istanbul, demonstrators were dispersed with water cannons and tear gas. The crowd made the Turkish President Recep Tayyip Erdogan include a fascist. With similar slogans were in the Greek capital Athens, about a thousand people towards the Turkish Embassy. The riot police prevented the pro-Kurdish group was able to reach the embassy.

In the German city of Cologne this afternoon were more than 6,000 protesters on his feet to protest against Erdogan.