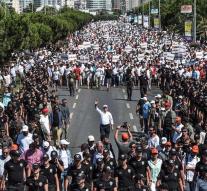 istanbul - A protest march against the policy of President Erdogan from Ankara to Istanbul ends with a mass raid on Sunday afternoon. The biggest opposition party in Turkey, the CHP, started a march on June 15, which is intended to protest against the Islamic Conservative government. Eventually thousands of people joined the march.

The CHP expects the final manifestation in the Maltepe district to raise some 100,000 people. Strong security measures are in force in the district.

It was this week a year ago that a coup was committed in Turkey. They failed. In the days following the coup attempt, tens of thousands of civil servants were fired or inactive. In the meantime, the counter is on 110,000 fired officials.