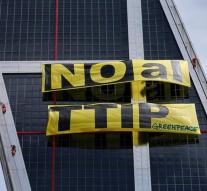 amsterdam - In several major cities Saturday people come together to protest against trade agreements such as TTIP. It is an initiative of Friends of the Earth. Including in Eindhoven, Utrecht, Nijmegen, The Hague and Rotterdam activities.

Locally, the initiative is in the hands of, inter alia, trade unions, political parties and Greenpeace. The aim is to take action across the country. Milieudefensie believes that the environment, health and rights are subordinated to trade and investment and will make people aware of it.

Horror bacterium: it should know


The launch of the campaign was given around 9. 00. When were the pictures on Amsterdam's Rembrandt which the shooters of the painting The Night Watch proposals placards hung around.

TTIP is proposed free trade agreement between the United States and the European Union. Negotiations about running since 2013.