Home / World / Protest in Baghdad against Turkish army in Iraq 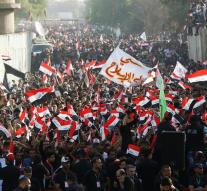 baghdad - Hundreds of Iraqis have protested Tuesday at the Turkish Embassy in Baghdad against the presence of Turkish troops on Iraqi territory. The demonstration had inter alia called by the Shiite cleric Moqtada al-Sadr.

The protesters shouted slogans like 'Turks out' and 'down with the occupiers.' Security Staff were lined up at the embassy to rein in the group of demonstrators.

The Turkish army trains in northern Iraq for some time fighters. Which should include helping the recapture of Mosul on terror movement Islamic State. The government in Baghdad sees the presence of Turkish troops as an infringement on Iraqi sovereignty and demands that Turkey withdraws. Ankara cares little for the Iraqi concerns.