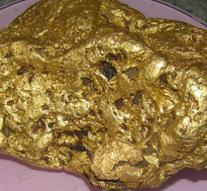 sydney - A man with a metal detector made the discovery of his life. In an abandoned gold mine in the Australian state g Friday he found a clump of 145 ounces (4.11 kilograms). The man had told this to the manufacturer of the metal detector, which made it to the world.

,, At first I thought it was an old horseshoe. 'Declared the lucky finder It proved a significant nugget, which was named 'Friday's Joy (Happiness Friday) But what do you do with so much gold,, It's like catching a big fish,..? What you need it? ' said the man.,, I wrapped the lump crops in aluminum foil and hidden in my oven. '

Earlier he found gold nuggets in this location. It is estimated that this finding is converted worth about 170 000.


In 1869, the largest gold nugget ever discovered. Who weighed 72 kilos.