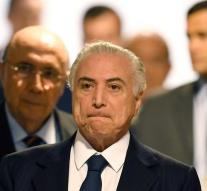 brasilia - Brazil's highest prosecutor, Rodrigo Janot, has charged President Michel Temer on Monday to accept bribes. It is the first of a series of heavy charges against the unpopular president expected this week.

The prosecutor has filed an appeal with the Supreme Court. According to Brazilian law, parliament must now vote whether the tribunal may prosecute a seated president. However, within the Temers coalition, politicians are convinced that they have enough votes to stop the second-thirds majority needed for prosecution.

Temer is accused of large-scale corruption around the company JBS SA, the largest meat processing company in the world. Leaders of that company have stated in a debt statement in exchange for punishment that they have paid the president almost 4.5 million euros for tax benefit and getting loans from government-run banks.

Joesley Batista, one of the brothers who owns JBS, says that he had a sound recording in which Temer bothered the bribe of a potential witness in the so-called 'Carwash' corruption case.

Prosecutor Janot already made a victory earlier on Monday when a Brazilian court sentenced the former finance minister, Antonio Palocci, to 12 years in prison for corruption and money laundering. Palocci was Minister of Finance under President Luiz Inácio Lula da Silva and Chief of Staff under his successor Dilma Roussef. He said that he could tell details of the corruption cases in return for punishment.