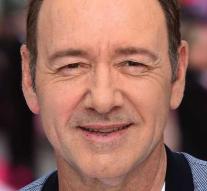 - The public prosecutor in Los Angeles has dropped a charge of sexual abuse against actor Kevin Spacey. Also two cases against Steven Seagal and Anthony Anderson are not continued, reports The Hollywood Reporter.

In the cases against Spacey and Seagal this was decided because they would be barred. The case against Anderson was closed because the victim who made a declaration did not want to make a statement.

It was previously announced that the public prosecutor had opened two cases against two-time Oscar winner Spacey. Spacey has been under fire since October for inappropriate behavior towards and abuse of a large number of male colleagues. The allegations have cost the star his main role in hit song House of Cards.

In both New York and London there are still investigations against Spacey following several reports. The first actor to come out with a # metoo story about Spacey was Star Trek star Anthony Rapp. Rapp was abused by Spacey in 1986 and was fourteen years old at the time.

Spacey defended himself with a statement in which he came out of the closet. The homosexual nature of the actor had been an open secret in Hollywood for years.