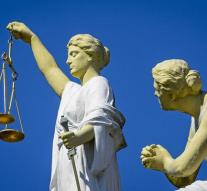 amsterdam - The 33-year-old J. K. must if the Public Prosecutor (OM) is five years in jail for the stabbing death of a 24-year-old man earlier this year in the city of Amsterdam. Also demanded the prosecutor hospital order with compulsory treatment.

The crime took place on 18 January. A chief officer saw the victim's drifting evening on the Damrak, and then he fell to the ground. The victim appeared to have been stabbed in the chest and back and died at a hospital of his injuries.

A day later, the police K. for something different, with runners at the search found a plastic bag with sweeping red. Also on his jacket, pants and shoes were the same sweep. Examination of the NFI has shown that they were traces of blood of the victim.

Camera images from the area then was to see that the suspect and the 24-year-old man the day before had been in contact and that K. and stabbing motion made towards the victim. The OM has given no explanation. 'Just out of nowhere the suspect with two stab wounds put an end to the life of a man who still had a long future ahead. '

Research has shown that K must be considered to be diminished responsibility. Experts estimate the recurrence rate high.

The court in Amsterdam is about two weeks verdict.