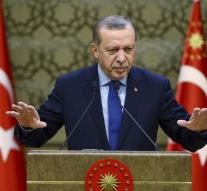 ankara - The Turkish ruling AK Party on Saturday submitted a package of constitutional amendments significantly expand the powers of the president. If parliament approves the proposals, Erdogan may stay on until 2029.

The proposals also provide for changes in the structure of the security and justice. The criminal immunity of the President, which can be for treason, is restricted now only prosecuted.

The AKP wants some time to expand the power of the president at the expense of those of the prime minister. The majority of the AKP in parliament is not big enough to make constitutional changes on its own. The party now expects to have the support of the nationalist MHP.

A constitutional amendment must receive the support of at least 330 of the 550 members of parliament. The AKP occupy 316 seats and the MHP 39.

If there is sufficient support, the amendment should be approved in a referendum. The government aims to keep it at the latest by May, and may take place simultaneous parliamentary and presidential elections in 2019, said Deputy Prime Minister Nurettin Canikli Friday.