Home / World / Promises May to EU citizens for after Brexit 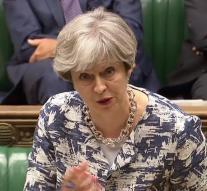 london - Citizens from EU countries who live for five years in the United Kingdom and abide by the law can also continue claiming the so-called settled status after Brexit. This status offers people from EU countries access to education, social services and healthcare.

Also, the status of people from EU countries gives the right to let their partner and children pass. This is apparent from British government proposals on the brexit that London has put online on Monday.

EU citizens who are convicted of serious crimes on a number of occasions must be fit. After the brexit, they may be able to expand the country faster.

Premier Theresa May told the BBC that she wants to keep EU citizens abiding in law after brexit in Britain. They called the 3.2 million EU citizens in the country 'an integral part of Britain's economic and cultural system. 'The prime minister added that there should also be EU guarantees for the 1.2 million Britons living and working on the continent of Europe.

Michel Barnier, EU's main negotiator for the Brexit, did not know how to be charmed by the UK proposal on the rights of EU citizens after the Brexit 'More ambition, clarity and warranties are needed', Barnier twittered. The EU's goal is to give citizens the same rights as in European law, remembered the main negotiator.

A week ago, London and Brussels began negotiations on UK departure from the EU, one year after the British voted in a referendum. The brexit must be completed in March 2019.