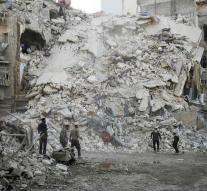 moscow - The Russian army has announced a ' humanitarian pause '' for Aleppo. Thursday will be from 8:00 to 16:00 local time no bombs and missiles falling on the eastern part of the city in northern Syria. That the Ministry of Defence announced in Moscow on Monday.

The temporary unilateral ceasefire which even the government forces of President Bashar al-Assad will honor the thousands of people getting the heavily besieged neighborhoods the opportunity to seek a safe haven and bring the wounded to safety. The rebels who control the area were asked to clear the mines that are on the route to the two corridors. Islamic insurgents themselves can freely leave their positions.

In the night from Sunday to Monday arrived by air raids on Aleppo dozens of people dead, including several children. That rescue have said in the city. Last weekend had discussions between inter alia, Russia and the United States on a cease-fire as yet no success.