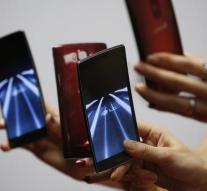 amsterdam - Smartphone Makers launched last year grand total of 175 new models in the Netherlands. According to data from GSMinfo.nl, reports Nu.nl. A total of 32 manufacturers responsible for the diverse offerings.

The price of a unit ranged from 52 euros (the Archos 35b Titanium) to 859 euros (iPhone 6S Plus). In addition, an average of 265 euro was changing hands for a new smartphone. The vast majority of new models launched were appliances to 200 euros. The high-end segment (over 400 euro) there were thirty tight market.

Of all the smartphones that were purchased last year, found 43 per cent come from the expensive segment. In total this year, 5.3 million smartphones sold in the Netherlands. In the first three quarters of the year the market grew by 8 percent.