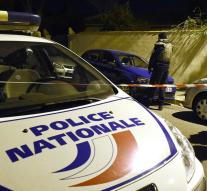 sens - The French authorities have declared a curfew in a neighborhood in the east of the city of Sens. The ban applies from Friday 22:00 to Monday 06:00 pm and is a result of searches in the night from Thursday to Friday.

In the searches in the Champs Plaisants district found his weapons and false identity documents. The residents of the neighborhood Friday night stay at home may not be on the street until Monday morning.