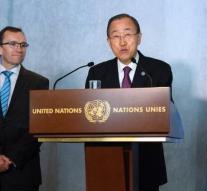 - In talks to find a solution for the divided island of Cyprus's progress. This said UN chief Ban Ki-moon on Friday in the Swiss Mont Pelerin, where take place the calls.

'In recent days, the issue of borders and all related dispute discussed. It has made significant progress, 'said a late Friday by the UN issued statement.

At the request of the Cypriot President, Nikos Anastasiades, a recess is inserted. On 20 November, the Greek Cypriot and Turkish delegations together again in Geneva. It was originally intended that the talks would last five days.

The current conflict began in 1974, when political unrest in Cyprus and a coup backed by Athens in the capital Nicosia led to a Turkish invasion. Turkey occupied since the north of the island. An estimated one fifth of the total of over one million inhabitants are ethnic Turks living in the occupied northern part.

Cyprus joined the European Union in 2004. The Turkish occupation of northern Cyprus is a major sticking point in relations between the EU and Turkey.