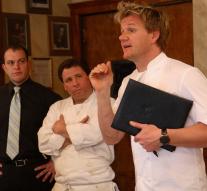 - The restaurant chain of the noisy TV cook Gordon Ramsay is back. For the first time in five years he makes a profit.

Last year, below the line, a plus of 740,000 pounds, compared with a loss of 2 million pounds in the last year, according to the Daily Telegraph.

The star cook, with an estimated capital of 132 million euros, achieved a revenue increase of 3% to 52 million pounds due to revenue growth of its foreign restaurants (+ 24% on an annualized basis). The Ramsay group now has 31 restauraunts. \u0026 Nbsp;

The Brit looks back on tumultuous years of loss. He pushed parts off. The loss would be the result of a wrong expansion. In 2014, his showpiece in New York lost both Michelin stars. Last year, the topman of the restaurant group was replaced by Stuart Gillies. Ramsay clashed hard with his business partner Rowan Seibel, a fight that led to legal proceedings.

Gordon Ramsay, with restaurants in all major European cities, is currently looking to expand with the Bread Street Kitchen Group.