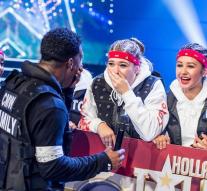 amsterdam - The hip-hop group The Fire has written history. They were sent home by the jury of Holland's Got Talent, but the audience voted with a wildcard for the final. They eventually won. 'We did not expect this. We thought, 'We're going to have a nice evening and show the jury they made a mistake.'

The word is Carlton Marks-Walden, the coach of the eight-headed formation from Eindhoven. He is 'a bit in shock' of the profit. 'The Netherlands chose us for the wildcard and then we win again. We still do not get it all. I am very happy, but somewhere I hoped a bit that it was finished after the semifinal. In a very short time we had to put together an act. The children were disappointed after the semifinal. There were tears in the dressing room. The jury comment was very good, yet they chose another act. That has hit them enormously. '

After the group, who was 14, 15 and 16, was told that they could still enter the stage in the live finals, they had three days to prepare their performance. Carlton: 'We have learned a lot of training. Some children were in their experimental week. I planned when they learned and danced. It was really blood, sweat and tears, with injuries and blue knees. We spent a whole day out for the physio. It was very intense. '

The jury members almost fell from their seats in the Endemol Shine studio in Amsterdam after the winners' performance. Gordon handed over more than one and a half million TV viewers on Friday night: 'How stupid we could be to send you home earlier. You are the best dance act I have ever seen. This just has to win Holland's Got Talent. 'Carlton:' The jury once again said that backstage was stupid. They found our performance very fat. Gordon was also so happy. He said we really deserve it. Whether our profit is a sweet revenge? A bit yes, haha. '

The group won 25,000 in the RTL 4-talent yacht. 'We have made jokes beforehand what we would do, but we wanted to invest in the dance school to make even more dreams come true. 'The Fire travels this summer to the American Phoenix for the World Hip Hop Dance Championship. 'That costs a lot of money. We have now gotten together with sponsors, but can, for example, look at whether we will go again next year. '

After The Fire was compiled by Carlton in 2014, the hip hopers soon became Dutch champions, then European champions and second in the World Cup. The coach himself participated in Holland's Got Talent in 2014. 'Then I was with my own group, The Junior Family, in the semifinal. The children of The Fire also auditioned, but did not break because there were many dance groups already. '

'We decided to try again this year. And the next generation just wins to win! My goal has been achieved. This is really very beautiful. I am very pleased that the Netherlands has made it possible for us. '

As a fire on the rocket, The Fire was invited by Humberto Tan to perform during Let's Dance in November. Carlton: 'We walked on Thursday evening for the training still past the Ziggo Dome, and talked about it: imagine we should act here. It is another dream that suits the children. '