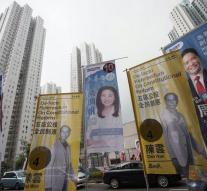 - Radical advocates of democratic or even Hong Kong have independently in elections to the board of the autonomous Chinese city is beaten a major battle. They retained more than a third of the seats and may continue to block as alignment with the rest of China. Moreover, plenty of seats moderate sympathizers radicals took over.

Sunday's election was the first since the demonstrations of the so-called Umbrella Revolution two years ago. Students and other advocates of democratization when occupying parts of the city to enforce less Chinese intervention. The Beijing government gave in, but the radical opposition did not give up and drew energy from the support that they had gathered with the protests.

The collision course of the radicals has somewhat loosened. The turnout was higher than it had been since 1997.