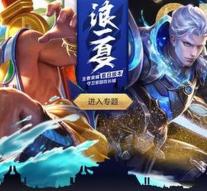 - Tencent, the Chinese Internet conglomerate, posted 57% more revenue in the first half of this year. Profit rose to $ 4.5 billion, 43% more compared to last year.

The $ 15.7 billion revenue is the strongest increase in seven years. This is evidenced by the company figures reported by Tencent.

The group attributes much of its growth to its video platform and game division. His game 'Honor of Kings' is one of the most widely used in China, in total, 200 million people play the game.

The game is so popular that Tencent has urged the government for a time limit for children's play time.

The second quarter better than the first quarter, with 60% sales growth year on year, and a profit increase of 70% compared to 2016.