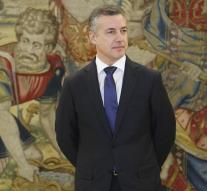 - The nationalists in the Basque Country on Sunday won the regional elections. The Basque Nationalist Party (PNV) leader Iñigo Urkullu received according to the first survey after the polls were closed most support, but which is by all appearances not big enough to govern alone. For this, a coalition partner must be sought.

In Galicia retained the center-right People's Party (PP) of Prime Minister Mariano Rajoy, a son of the region, the absolute majority. Alberto Núñez Feijóo is in power and continue his policy unhindered since 2009. The exit poll showed that the margin with the Socialists (PSOE) has even become something bigger. As in the Basque Country lost the largest opposition party in comparison with 2012 seats to newcomers Podemos.

About four million people spent in these autonomous regions in the northwest of Spain their vote. For the government in Madrid is particularly important how the PSOE it allures them. If the result is disappointing, party leader Pedro Sánchez can lose influence. He blocks so far a new term of Rajoy. Fellow socialists tolerate a PP government, it might come to the surface. The current stalemate Spain has not fully functioning government since the end of 2015.