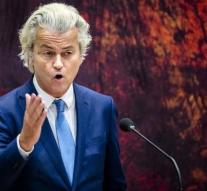 to direct - Professor Tineke Cleiren, Professor of Criminal Law at the University of Leiden, sees little in Geert Wilders's initiative proposal to prevent potential terrorists from being prevented. The precautionary term should take up to six months, according to the political leader of the PVV.

'It's nice for the bühne, but I do not see this soon become reality and I think this is a hardly serious proposal,' Cleiren says about the proposal. She calls it a 'wild idea'.

'Wilders brings together a whole lot of things. 'The legislation does not seem to be inadequate; There are sufficient legal possibilities for dealing with terrorist acts or suspicions.

'Wilders claims that there are too few people to follow and address potential terrorists. Well, that's a practical problem that can be solved by making more money available to people at the AIVD. You do not need a new law, it seems to me. '

Cleiren also states that the AIVD is not empowered to address people. The service is, according to her, equipped to gather information and to gather information, and then to share with the investigating authorities, not to chase after people. 'The AIVD does not have the power to rob people of their freedom. '

According to Cleiren, the proposal lacks the basis of our legislation: 'You need starting information, a basis on which to hold someone on suspicions of a criminal offense. In this proposal you can be picked up when you buy a bus. Hair straightener at the drugstore. '