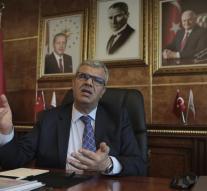 istanbul - The Turkish police arrested the producer of a film about President Erdogan. Ali Avci and another person were detained in the house of the producer in Istanbul, the Turkish press office DHA reported Thursday. Avci is accused of joining the Gülen movement.

Ankara considers this movement around the spiritual fethullah Gülen in exile America as a terrorist organization. The Turkish leaders hold him responsible for the attempted coup of July 2016.

Avci is a producer of the film Reis (leader), who came to Turkish cinemas in March. The film talks about youth and the first years of politician Erdogan. Avci is also director of the Uyanis film (wake up) which, according to Turkish media, is about the attempted coup on July 15, 2016. The trailer tells what might have happened if the coup had been successful. In a fictitious order is shown how Erdogan's family is killed and the rebels hold a weapon against the head of the president.