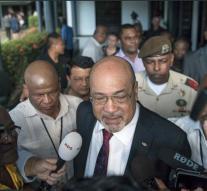 The court-martial will consider in the coming months on how to proceed with the so-called December 8 process. This consideration is required now asked the prosecutor to stop the process. That Judge Cynthia Valstein-Montnor Friday in Paramaribo said. She adjourned the matter for November 30th.

Also prime suspect's lawyer Desi Bouterse, said Friday that the case should be put stop. Lawyers for other defendants pleaded just to let the matter.