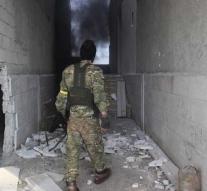 beirut - At least 36 pro-Syrian fighters were killed during a series of bombings by the Turkish Air Force in the Syrian Afrin region. That reports the Syrian Observatory for Human Rights Saturday.

According to the observatory, it was the third time in 48 hours that the Turkish army fought the pro-government troops with fighter planes. The troops loyal to President Assad's regime invaded the Afrin region more than a week ago to support the Kurdish YPG militias.

Turkey is engaged in an offensive in Afrin, which is in the hands of the YPG militias. Ankara sees the YPG as a terrorist movement and a threat to Turkish national security. The United States, a NATO ally of Turkey, sees the Kurdish fighters as a reliable partner in the fight against Islamic State.

Turkish Prime Minister Binali Yildirim said Saturday that his troops have conquered Rajo on the militants. According to the observatory, the Turkish army controls about 70 percent of the city. Rajo is located near the border with Turkey, about 25 kilometers northwest of the city of Afrin.