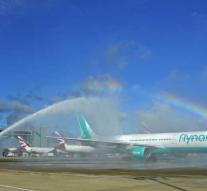 riyad - The Saudi airline Flynas will hire female co-pilots. The decision follows reforms that give women more opportunities to participate in the labor market.

Price fighter Flynas, formerly known as Nas Air, has a fleet of thirty aircraft. They fly at dozens of domestic and foreign destinations. The company says it wants to enable Saudi women to play a greater role in supporting the economy of the Islamic kingdom.

Saudi women may also have been behind the wheel of cars since June. They were previously dependent on male drivers. The driving force behind the economic and social reforms in the country is Crown Prince Mohammed Bin Salman. He wants to make the economy less dependent on oil.