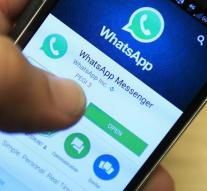 brussels - WhatsApp should provisionally stop sharing personal contact information with Facebook users. Writing the EU working group of privacy watchdogs, including the Dutch Authority for Personal Data, in a letter to the US company.

Sharing such as names and phone numbers was not in the original terms of use and may be in breach of European rules on data protection, said the so-called Article 29 Working Party.

Facebook WhatsApp bought in February 2014 for $ 16 billion and kept the customer data from both services until recently divorced. But recently the terms of use were changed, allowing exchange is possible. ' Given the popularity of instant messaging, these changes have implications for citizens in all EU Member States, '' the letter says. ' This has caused great uncertainty among users. ''

WhatsApp is asked to make all relevant information available as quickly as possible. ' That is of the utmost importance in order to draw correct conclusions. '' Facebook said earlier not acting contrary to EU law.

Minister Ard van der Steur (Security and Justice) said last month concerns about the issue. The Authority for Personal Data said or to have questions, but took no action yet.