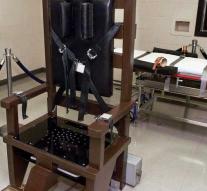 tennessee - A convict sentenced to death indicated that he would rather die by using an electric chair than a lethal injection. The execution of the man from the American state of Tennessee is expected to take place on Thursday evening around 7:00 PM local time.

63-year-old Edmund Zagorski was sentenced to death for the murder of two men in 1984. He asked in October on the day that his death sentence would actually be enforced by injection, electrocution. He did so because in his state a controversial drug is in the deadly injections, CNN reports. His lawyers argued that the injection would bring him the last ten to fifteen minutes in his life in 'extreme fear and agony' while the electric chair would only give him 'unbearable pain for fifteen to thirty seconds. '