Home / Tech / Prison for hacker who peeked through webcam 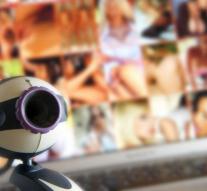 The man was sentenced to a prison term of 497 days, with 360 days suspended. He was given a community service order of 240 hours. He is, according to the court in The Hague diminished responsibility because he suffers from Asperger syndrome, a form of autism.

The man also hacked accounts on Twitter and Facebook. There he changed include the passwords. He also sent chats to friends of the victims. One of the victims said that programs itself ENDED and Word documents suddenly disappeared from the hard drive. The perpetrator said he did so out of boredom. On the computer of the man found the detectives child pornography. There too he is convicted.

The Dutchman was in 2013 involved in the theft of a pre-university exams French shortly before the exam would be held. He came to the questions by using a hacked computer. Its owner was arrested and gold for months as a suspect, according to the judges.