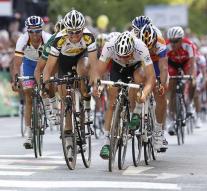 frankfurt - The man put a stripe whose alleged plans for an attack last year by a Frankfurter cycling race, on Monday sentenced to two and a half years in prison. The court found the Turkish German Halil D. guilty of prohibited weapons and explosives possession and forgery.

The Prosecution wanted the 36-year-old D. initially accuse plotting a subversive act of violence, but dropped it much heavier indictment because it could not prove.

In the basement of the convicted police found just before the last edition of the cycling race Eschborn-Frankfurt City Loop a ready-made pipe bomb and a number of weapons. Because D. moved in Salafist circles and had smashed under a false name chemicals that could be used to manufacture a bomb, police feared that he plotted an attack on the course.