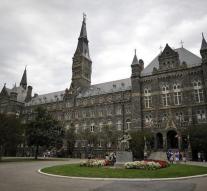 - Georgetown University in the US capital Washington will give priority to the descendants of slaves who were held by the university or college which has benefited otherwise.

The scheme involves apologies, the establishment of an institute for the study of slavery in the US and a monument to slavery. Also some of the university buildings are renamed, for example, a slave held by Georgetown.

Many US universities have admitted their ties to slavery and it apologized for, but a special arrangement for the descendants of slaves is unique. Critics point out, however, that its success depends entirely on how active Georgetown will look for the descendants.


One of the descendants of slaves held by Georgetown, it also takes quite frugal college that the scheme does not provide scholarships for descendants. Also, none of the offspring invited for the presentation of the scheme. 'They call us family. I am from New Orleans and if we have a reunion, the family is invited. '

Georgetown University was founded in 1789 by the Jesuits. From the very beginning, slaves were used, both on campus and on the plantations of the Catholic order in the state of Maryland.