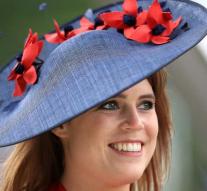 - On Friday it is the big day for Princess Eugenie, which she has been looking forward to for months and that caused a lot of nerves the day before, the 28-year-old told in an interview with the ITV channel.

'It is unnerving and a bit scary, all those things that come to mind at a wedding. But in the end you can marry the person you love, 'said Prince Andrew's daughter about her fiancée, Jack Brooksbank.

Her father leaves Eugenie Friday in the St. George Chapel of Windsor Castle. The princess joked that she had pressed him to take it easy. 'I told my dad that if he runs too fast, we will not talk to him anymore. So he will hopefully walk very slowly. '

In the interview, the princess and her future husband looked back on their first meeting seven years ago in Switzerland, the two of whom, according to the groom, initially stared at each other. 'And then you came to me and shook my hand,' says Eugenie. 'I became very nervous and felt butterflies. 'The princess stated that the same day she called her mother, Sarah Ferguson, to tell her about the nice man she had met.

Eugenie and Jack marry Friday at 12 o'clock. According to Daily Mail, the princess and her father arrive in a Rolls Royce from 1950 that Queen Elizabeth lent for the occasion. Back nephew and niece George and Charlotte are bridesmaid and maid of honor. It is still unclear whether Eugenies grandfather Prince Philip will be at the wedding. The 97-year-old received a number of soldiers on Windsor Castle Thursday night, which according to British media indicates that he will also be present at the wedding ceremony of his granddaughter.