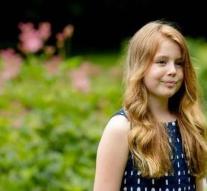 (ANP)- Princess Alexia goes to the high school, the Christian Gymnasium Sorghvliet in The Hague, where her oldest sister, Princess Amalia, begins her third year. Princess Ariane visits the three daughters of King Willem-Alexander and Queen Máxima, the only Bloemcampschool in Wassenaar.

The June 12th Alexia has been looking forward to the transition for a long time, Queen Máxima told Warmond at the beginning of the summer holiday last month. 'Alexia has only heard stories about Sorghvliet in the past two years. This teacher, the teacher. Of course, she was much better prepared than when Amalia began at her high school, 'said Máxima.

She had the time at the elementary school 'very happy'. 'She has nice friends, a nice group. But she's very close to it, 'the Queen knew. Like Amalia, Alexia will basically drive the eleven kilometers from Villa Eikenhorst in Wassenaar to The Hague, with security in her wake.

Monday's first school day is short: books need to be collected and classmates can be introduced. The real work will not start until Tuesday.