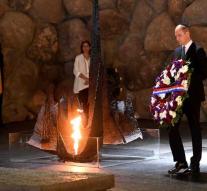 - Prince William started Tuesday on his first full day of the official visit to Israel. The Duke of Cambridge started with a visit to the Yad Vashem Holocaust Museum in Jerusalem.

In the memorial room William laid a wreath next to the Eternal Flame, after which he made a round through the museum. William said he was touched by what he saw in the memorial center. So he expressed his disgust after seeing shoes of Jews who were killed in a death camp. 'Terrible,' according to William. 'I try to imagine the scale of this. '

Later in the day a meeting is planned with the Israeli Prime Minister Benjamin Netanyahu.

William arrived at Tel Aviv airport on Monday, where he was met by Israeli tourism minister Yariv Levin, British ambassador to Israel David Quarrey and Mark Regev, the Israeli ambassador to Great Britain. It is the first time that a British royal has set foot on Israeli soil for an official visit.