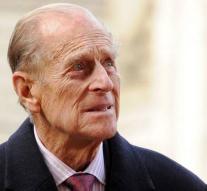 london - British Prince Philip was admitted to a hospital on Tuesday night. According to Buckingham Palace, it is a precautionary precaution because the prince has an infection, the transmitter reports Sky.

The prince will not be present in parliament on Wednesday, where Queen Elizabeth reads the throne.