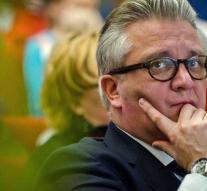 - Prince Laurent has appeared on Tuesday at the funeral of the two police officers who died last week during the shooting in Liège. The brother of the Belgian King Filip was standing outside the audience watching the big screen.

The presence of Laurent was not announced in advance. King Filip sent a representative to the funeral. He can not be there because he receives King Willem-Alexander and Grand Duke Henri of Luxembourg in Brussels. At the ceremony further agents from all over the country and various politicians came. Among them is the Belgian Prime Minister Charles Michel.

Two female agents and one male passer-by were shot dead last week in the Walloon city south of Maastricht. The shooter was killed by a police bullet after he had taken a woman hostage in a nearby school.