Home / World / Prince Harry: no one wants on the throne 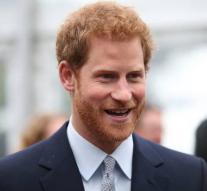 - According to Prince Harry, no one of the British royal family is waiting for the throne to pass. This remarkable statement puts the prince in an interview with the American magazine Newsweek.

'Is there anybody in the royal family who wants to be king or queen? I do not think so, but we fulfill our duties at the right time,' said the British prince. He adds that he has deep respect for his grandmother Elizabeth and that his brother William will certainly continue the positive climate that the queen has put in the past sixty years, but in another way.

'We are involved in the modernization of the British monarchy. We do not do this for ourselves but for the great whole, for the people.' At least, from grandmother, he gets all the room to reintroduce the British monarchy and there is the Prince happy with it. 'She tells us to take the time, use this wisdom and think about things. We do not want to go anywhere, shake hands and not be involved.'

At the time of the burial of Harry's mother, Princess Diana, Harry, at the time of the age of twelve, recalls: 'My mother was just dead and I had to walk a long piece behind her coffin surrounded by thousands of people watching me and another million Who followed TV. I do not think you can ask a child to do that under any circumstances. I do not think that would happen. '

The 32-year-old prince still has the idea that he lives in a fish bowl, but he can handle it better now. The image of partyprins he has been on for a long time. 'I can still be a bit naughty, but that helps me make contact with people who are in trouble.'

In the interview he also praises his mother, who has introduced him to 'ordinary life', something he will surely pass on as he himself has children. 'Even if I was king, I would still do my own groceries.'