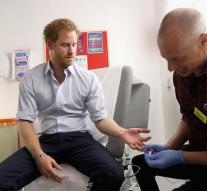 london - Prince Harry live on Facebook had an HIV test. Britain's Prince was Thursday in the Guys and St Thomas Hospital in London and leave in a movie how easy it is to do an HIV test.

The doctor pierces Harry's finger for a blood test and explains to the prince. Who says he is still nervous a little bit. He is amazed by the speed with which the result is known, for less than a minute later, the doctor tells him that everything is okay.

Harry wants to show the movie how easy such a test, 'Whether you are male, female, gay, straight, black, are white. It's so easy,' he says. 'Even for a redhead,' he jokes, pointing to his own hair.


The prince committed with his own foundation Sentebale over ten years for children with HIV in Africa. In his own country he often brings the topic discussed. He follows them his mother, Princess Diana, who also did much to research and control the disease as possible.