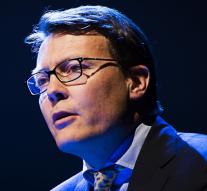 amsterdam - Prince Constantijn pulled the recent dramatic events on Wednesday at the presentation of the Prince Claus Award in Amsterdam. Technology brings the world closer to the people, but also leads to more and more " confusion ", he said in the Royal Palace.

" We see incomprehensible and disturbing images of bombed cities, bloated monuments and killings in Syria, refugees in Greece, Turkey, Jordan and Lebanon and terrorist attacks in Paris, Nigeria and Beirut ", said Constantine.

That which happens far away, comes as the prince in our own homes, and in what is close by, the whole world watching them. " We have an opinion about African lions and American dentists, and are surprised about the global outrage over the Bogeyman discussion in the Netherlands. "

People Search " simple answers instead of nuance and insight ", the prince said during the ceremony, which was also attended by King Willem- Alexander, Princess Máxima Queen Beatrix and the princesses, and Mabel Laurentien. " We are soon shocked and want to quickly pass judgment without knowing the context. "

Constantine presented the Principal Prince Claus Award (100 000 euro) on the Iranian photographer Newsha Tavakolian, because it plays a leading role in the culture and development of her country. She lives in the Iranian capital Tehran, together with the Dutch correspondent Thomas Erdbrink. Ten other winners received the 'ordinary' Prins Claus Award (25 000).

The prices of the Prince Claus Fund, which since 1996 for culture in developing countries.