Home / Tech / 'Prince Constantijn along with Camp to Silicon Valley' 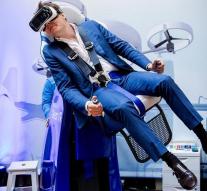 - "To strengthen cooperation between Dutch and US tech companies will minister Henk Kamp (Economic Affairs) in early January to the US Prince Constantijn going with this economic mission."

"The prince has been appointed special ambassador to bring to the Netherlands from abroad innovative entrepreneurs. Constantine camp and visit the Consumer Electronics Show in Las Vegas, the most important technology fair in the world. Previously in this exhibition such as electric cars and new versions of the Windows operating system presented. This time we have for the first thirty Dutch startups in the Dutch Pavilion."