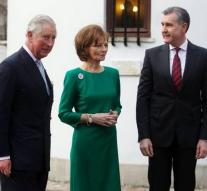 - Crown Princess Margareta of Romania and her husband Prince Radu on Thursday received Britain's Prince Charles. The British heir to the throne, bringing an official visit to Romania, the couple met at the Elisabeta Palace in Bucharest.

It was provided by the state in 2001 palace built in 1936 to King Mihai, the father of Margaret. The royal family has his office and important guests are received in this palace. Charles was last year, when he spent his vacation in Romania.

Prince Charles Thursday also met with Romanian Prime Minister Sorin Grindeanu. The Prince of Wales is working on a nine-day trip that also takes still to Italy, the Vatican and Austria him after Romania. Charles' wife Camilla joins expected Friday in Florence.