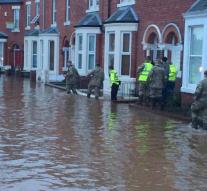 lancaster - British Prime Minister David Cameron visited Monday the West of England, which last weekend was flooded after heavy rain. The worst hit area is located between Liverpool and the Scottish border in the counties of Cumbria and Lancashire. In the tourist Lakeland reached an estimated 340 millimeters of rain coming down in 24 hours. The army has been enabled for the evacuation of people who are threatened by the rising water.

Numerous schools and hospitals have remained closed Monday as a result of the flooding. Roads and railways have become impassable by water.