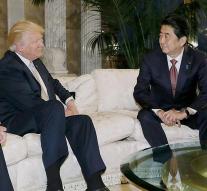 Abe said that the two had talked about various subjects, but he did not say anything about the content, because the calls are unofficial. The meeting was intended to ensure the relationship with the US and to underline the importance of the bilateral military alliance.

Trump had his 'America First' rhetoric concerns raised by various partners. So he wants that Japan and South Korea to contribute more to the cost of the US military presence.