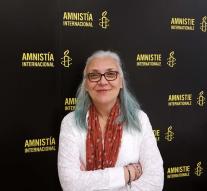 strasbourg - Turkey has to release Immigration International Director of the Turkish Department on Wednesday. This call made the two Turkey rapporteurs of the Council of Europe on Friday.

European parliamentarians, including Turkey's rapporteur Kati Piri (PvdA), did that on Thursday. EU Commissioner Johannes Hahn (Enlargement) surveyed the issue in Ankara that day, but did not get a satisfactory response.

Idil Eser, Director of the Human Rights Organization in Turkey, was arrested with seven other Turkish human rights activists and two trainers from Germany and Sweden. They participated in a training near Istanbul from the Dutch organization HIVOS. He is very concerned and calls on Amnesty to exert pressure on presidents of the G20 summit in Hamburg on President Erdogan.

The Council of Europe, which oversees democracy and human rights, has 47 countries, including Turkey. The organization has supervised the country. The rapporteurs call the arrests a 'devastating signal'. Amnesty previously spoke of 'grotesque abuse of power.' One month ago, the president of Amnesty in Turkey was arrested.