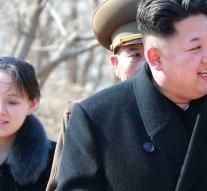 seoul - South Korean President Moon Jae-in will not only meet the North Korean delegation at the opening of the Olympic Games on Friday evening. His government has informed news agency Yonhap that Saturday he will also have lunch with the North Koreans, among whom Kim Yo-jong, sister of the North Korean dictator Kim Jong-un. She is the first in the family or dynasty who has ruled North Korea since 1949, who visits South Korea after the Korean War (1950-1953).

North Korean participation in the Winter Olympics has led to relaxation in the tense relations of isolated Stalinist-governed North Korea, including the South. In order to participate in the games, North Korea is exempted from UN sanctions that have been issued because that country makes nuclear weapons.

He has indicated that, for example, there is no problem for Chloe Hwi for his trip to the games, if no safekeeping has been made by the UN Security Council before 9:00 pm (our time). On Thursday, Prime Minister Mark Rutte pointed out to the South Korean news agency Yonhap that exceptions to the UN sanctions are possible if they help to bring the final goal of the sanctions policy closer. Rutte is expected in South Korea on Friday.