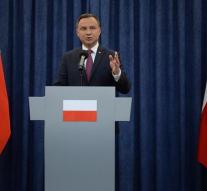 warschau - Polish president Andrzej Duda is threatening to abstain from the signature of a controversial reform of the Supreme Court. Reforms are needed because the Poles are not satisfied with the way in which the case law works, 'but the reforms must be wise,' said the president on Tuesday.

For example, Duda wants to appoint a common majority for the election of a college that is to be appointed in future, but only one in three fifths. The ruling Party of Justice and Justice (PiS) does not come in parliament there.

The parliament debated Tuesday about the proposals of the PiS. The parliament building has been since Sunday when thousands of Poland in Warsaw and other cities went up the street to demonstrate against the plans, deployed with fences. The European Union has also expressed concerns about the proposals. The opposition sees in the presentation of President Duda a sign that the PiS is contributing.