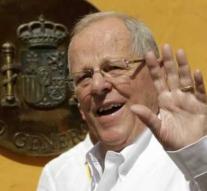 lima - The President of Peru Pedro Pablo Kuczynski has honored himself on Wednesday and has resigned after his center-right government was caught up in a new scandal. This time the accusation was the recruitment of votes.

With his decision, 79-year-old Kuczynski, a former banker on Wall Street, tried to face a deposition procedure. This would be voted on in the short term.

It is unclear whether the congress, controlled by the opposition, accepts the dismissal request or continues the plan by sending the president away himself on Thursday because he is 'morally inadequate' for the office. Kuczynski, who denies the new allegations, had previously been discredited by his financial relationship with a company that is at the heart of a major corruption scandal.