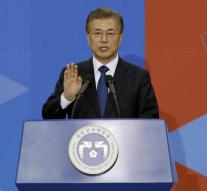 Advisers of both presidents spoke Tuesday in the South Korean capital Seoul. According to the agency of Moon, the ultimate goal of South Korea and the United States is the 'complete' denuclearization of North Korea.

North Korea tested a new type of rocket for the medium distance on Sunday. According to the Pyongyang regime, the rocket can be equipped with a core head.