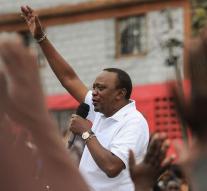 nairobi - President Uhuru Kenyatta wants to address the judiciary in Kenya. The country, he said, has 'a problem' with the judges who ruled that the elections he had won last month must be done.

'Who have you chosen? Are you chosen? 'He said about the members of the Supreme Court. 'We have a problem that we need to correct. 'That will happen after the new elections, because Kenyatta repeated his Friday statement that he respects the ruling of the judges. 'For the moment, we first see each other at the ballot box,' he told Twitter.

The Supreme Court ruled Kenyatta's election victory invalid. The supreme court ruled that the decision was supported by four of the six members of the court. Details of the ruling will be published in three weeks. The new elections must be held within two months.