Home / World / President Iran: we are at war with the USA 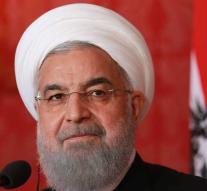 teheran - Iranian President Hassan Rohani has sketched a gloomy picture of his country's relationship with the US on Saturday. In a speech in Tehran, Rohani said that Iran 'is in an outright war with the United States.'

Rohani said that war is not being fought with bombs and armored vehicles, but as a psychological and economic war. The president called on all political groups in his country to be united on this 'battlefield' and to show the Americans that the Iranians are willing to pay a price for their independence.

The relationship between the US and Iran has further deteriorated since President Donald Trump earlier this year decided to tear up the nuclear deal that was signed with Tehran under his predecessor Barack Obama. Trump wants a better deal with Iran and tries to put the Tehran government under pressure by instituting sanctions.