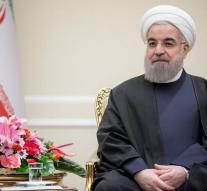 ankara - Iranian President Hassan Rohani has promised Thursday that his country will no longer be in isolation. At his deployment by ayatollah Khamenei, Iran's highest spiritual leader, the 68-year-old president said on Thursday that 'we will never accept isolation.'

Rohani was the cradle of the deal that ended his country with the United States and other international powers in 2015 to curb the nuclear aspirations of the Islamic Republic in exchange for the lifting of economic sanctions. US President Donald Trump imposed new sanctions on Iran on Wednesday after calling the deal signed by his predecessor Barack Obama 'the worst deal ever'. Iran called the new sanctions a breach of the agreement and announced an 'appropriate and proportional' response.

In May, Rohani was re-elected as president of Iran by a large majority. The power of the president is limited in comparison with that of spiritual leader Ayatollah Khamenei, who has repeatedly criticized Rohani.